Meet Dorothy Rosby and her latest book,  I Didn’t Know You Could Make Birthday Cake From Scratch: Parenting Blunders from Cradle to Empty Nest . Dorothy Rosby is a syndicated humor columnist whose work appears in publications in eleven Western and Midwestern states. Her column has been recognized by the South Dakota Newspaper Association, the South Dakota Federation of Press Women, and the National Federation of Press Women. She is also the author of the humor book, I Used to Think I Was Not That Bad and Then I Got to Know Me Better. Visit her website at www.dorothyrosby.com. Follow Dorothy on Facebook and Twitter 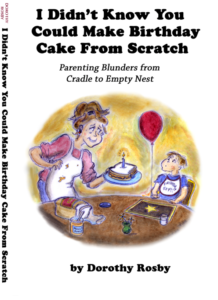 Below is a wonderful print interview with this amazing woman. Get to know her better. You will laugh! And if you are in Rapid City, South Dakota area on Saturday April 30th, Dorothy is having a book signing at Mitzi’s Books at 510 Main Street!

Tell us about Dorothy Rosby – you know all the fun life history stuff?

I was raised in a very large family in a very small town. My hometown, Buffalo, South Dakota, had fewer than 400 residents when I lived there and my family was a large percentage of them. I might be exaggerating a little, but I’m number nine of ten children (seven boys, three girls.) Meanwhile, I have just one child, my son Isaac.

I graduated with majors in communications and journalism from Augustana College in Sioux Falls, SD and spent about ten years working as a radio announcer in Iowa and South Dakota. Then for the past 27 years, I’ve been a public relations professional for a wonderful nonprofit which serves more than 600 people with a variety of disabilities here in Rapid City, SD.

Did you always write humor or did you transition into humor? 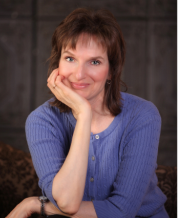 I’m the poster child for the sandwich generation. My mother and my son were 80 years apart, so I was raising my son, caring for my mother who lived with us for several years, and working all at the same time. (She died in 2013 at the age of 96). I’d been dabbling in a variety of other writing (outside of my day job, which also involves a huge amount of writing) since I was young, but I had to narrow my focus because of my family’s needs.

It was really my experience as a humorous speaker that led me to choose humor. For many years, I’ve been a member of Toastmasters, an organization where members practice their public speaking skills. I’ve always loved doing humorous speeches and I’ve won many humorous speech contests, the highest level being a regional contest in Winnepeg, Manitoba, in 1987. That was as high as the the humorous contest went at the time.

Twenty years ago I rewrote some of my speeches and submitted them to my local newspaper, the Rapid City Journal. The editor agreed to take me on as a humor columnist and I’ve been that ever since.

I like to say I gave birth to my two babies a month apart. First came the humor column followed a month later by my son, Isaac, right on his due date. (I’m a columnist; I never miss a deadline.) It should be noted that his due date was April Fool’s Day.

What inspires your humor? Does your family enjoy when you use them in your humor columns?

I have deadlines, so I take my inspiration wherever I can get it. When it comes to how my family feels about that, I’m not sure “enjoy” is the right word. But my son grew up in front of my readers and has always seemed to take it in stride. While I often write about both him and my husband, I don’t think I ever do it in a negative way. (If they disagree, they’ve never said so.) I’m a big fan of self-deprecating humor and I do try to make myself the butt of the joke whenever possible, rather than them. Even so, I asked my son for his permission before I published this book, and he gave it without any bribery whatsoever on my part.

Goal…learn to write shorter titles. J The title of my first book had 17 words. (I Used to Think I Was Not That Bad and Then I Got to Know Me Better.) This one is a little better.

Why did you choose to put together this collection?

All writers eventually write parenting books, except maybe the ones that don’t have kids. There are three reasons for this. 1) Children and family life provide a huge amount of fodder. 2) All these years while we were trying to write, our kids were distracting us. It’s revenge. 3) I can’t remember what the other one is.

What is this book about?

This is the book for every parent who’s ever tried to crowd source her child’s braces, or ever told her child to shut up and be quiet so she could finish reading a parenting magazine, or ever stuck a birthday candle in a peanut butter sandwich and called it birthday cake. In it, I fess up about my parenting blunders from the cradle through empty nest. It really should be longer.

← Week 2 of HO Summer of Promotion: First Up is Molly Stevens author of Boomer on the Ledge
An Excerpt from Dorothy Rosby and I Didn’t Know You Could Make Birthday Cake from Scratch →
Loading Comments...